I received all of my vaccinations on time as a child growing up. My mother was a medical technologist and had taken blood from a patient infected with measles. She had seen these diseases first hand. I began to look more deeply into vaccines when I was pregnant with my first child, during the fall/winter of 2009. I knew the H1N1 flu vaccine was recommended, especially for pregnant women, and I was considering whether I should get the H1N1 vaccine as well as the regular flu vaccine. The first thing I did was talk to family and friends who were pregnant or had been pregnant to find out what they had done. I spoke to people who were pro-vaccine as well as people who were anti-vaccine. My own doctor's strong recommendation as well as hearing about pregnant women who had died from H1N1 led me to get both flu vaccines while pregnant. After my decision to vaccinate myself, I began further research about vaccines for my baby. I found that a lot of what I heard and read from the anti-vaccine side had a strong basis in fear and "what if" thinking. What if vaccines cause autism? What if vaccines are causing the rise in allergies among children? While these possibilities triggered what I would call the "fear mind," my rational mind was able to look at the research available online, much of which I found through Ashley's blog (Science for Sale). I saw that the research overwhelmingly supported the safety of vaccines. I could also see that the pro-vaccine argument was research-based, history proven, and logical. In addition to online research, I questioned pediatricians whenever I had the opportunity. I spoke with 5 different pediatricians who all recommended vaccinating without reserve. They said they vaccinated their own children and grandchildren. They spoke of the dangers of not vaccinating. We decided to vaccinate our son Zachary, and he has received all his vaccinations on time starting from the day he was born. He has been extremely healthy and the only reaction to the vaccines has been a couple hours of being tired and cranky. I do still get nervous when I bring him to get vaccinated. I wish the doctors gave more information about what he is being vaccinated for and the ingredients in the vaccine and the safety of those ingredients. Regarding those details, I had to find out the information on my own. I understand doctors and nurses are busy and weary of the vaccine debate, but I think it would help parents who are nervous about vaccines to have more access to information.

Regarding my interaction with the anti-vaccine community, I have had a hard time with this because I have three cousins who I was very close with growing up who are not vaccinated. Their father is a chiropractor and for whatever reason did not trust that vaccines were safe. They are now all having babies of their own, and the vaccine issue has surfaced in discussion and emails. The discussion can get contentious, and I don't want to create a bad relationship with family members, so I try to relay the pro-vaccine argument as clearly and objectively as possible. Although I have not expressed my personal fears to my cousins for fear of ruining our relationship completely, I do fear for my son who is almost 11 months and has not received all his vaccinations yet. I want my children to be able to play with and know their cousins, but as a mother I know I have to protect my child in the best way I can. I would feel responsible if he contracted a vaccine-preventable illness from people who I knew were not vaccinated. I know that I'm taking a risk when my son is around these family members and its an issue that I still struggle with.


If you are a parent who chooses to vaccinate and would like to share your story, please send us your story. We are also always looking for cute pictures of your vaccinated baby or child for our "Cute Vaccinated Kid of the Week"!
Posted by Moms Who Vax at 3:00 PM No comments:

There's something unintimidating about watching your child receive the rotovirus vaccine. It's a drop in the mouth, something that, while not exactly palatable, doesn't prick. I'm sure from a child's point-of-view, this is a preferable way to receive an immunization. I've often told my friends that all immunizations should be administered this way. It seems to be human nature to react to a large needle dripping with medicine with suspicion, especially if that needle is heading for our baby's tender thigh. The truth, of course, is that we should be eagerly awaiting this immunization so we can sit back and relax for the first time since the baby was born and feel somewhat sure he or she is at least minimally protected from pretty awful diseases. And many of us parents do feel that way, but I think it takes some practice. As humans we are very susceptible to the way things are presented to us. In George Lakoff's book Don't Think of an Elephant, the concept of "framing" information played on this human tendency. I think it might be time for those of us who vaccinate to consider re-framing the "vaccine" question by taking a small but potentially powerful step. It's time to stop letting anti-vax activists dictate the debate. Here is one way to do it.

Some, like me and a couple other of the Moms Who Vax, consider the word almost ruined. The word immunization, on the other hand, feels unassaulted and it doesn't raise the blood temperature in the same way vaccine seems to do. Yes, we call ourselves Moms Who Vax--but Moms Who Immunize just didn't have the same ring to it. But choosing the words we use to talk about this issue can have an effect. It's a small idea, perhaps too small, but I believe that instead of trying to reclaim the term "vaccine" we should plant our flag on "immunization." So, with a few exceptions, you will see vaccines referred to as immunizations on this blog, and if you are a parent who immunizes, I ask that you consider referring to vaccines the same way. And if you're interested in learning more about Lakoff's theories on framing, please check out this article on his ideas.
Posted by Moms Who Vax at 2:46 PM No comments:

Today my younger sister took her two-month-old daughter to get her first vaccinations. She asked me to be present. After we talked to the doctor about the baby's bowel movements, her tendency to spit up, her impressive head and neck strength, we got the vaccination question. At that point, my sister got tongue-tied, and she turned to me.

"You're right," she said. "We don't turn away unvaccinated children. We try to convince the parents to vaccinate, of course, and give them the facts." She continued. "We had a case of measles here on Friday." It was like the air was sucked out of the room. The doctor was pregnant herself. I mentioned that I thought that must have been a bit scary for her. "Luckily, I was on the other side of the clinic at the time," she said. "But we have very clear protocols for handling that."
"Do other parents have the right to be notified?" my sister asked.
"Yes, we notify anyone who might have been in the waiting room that day, and if we suspect the child has measles, we put him in a specific room in the clinic."

I looked at my sister. This didn't see like enough. And I agreed. "It's really refreshing to hear from this point of view," the doctor added. "Parents who are concerned about unvaccinated children." She told us that since the Twin Cities measles outbreak, some parents who had, to this point, left their children unvaccinated had relented and brought their kids in for vaccines. I found this a hugely positive step.

Then it was time for the vaccines. The physician's assistant had set down a piece of paper and said: "Here are the vaccines for this visit. She then said: "You'll be getting shots for these eight diseases," and went down the list. I cringed. As soon as she left, I turned to my sister. "This will actually consist of two injections." Her eyes had grown wide, because it sounded like this baby was going to get eight shots. Going down the laundry list of diseases a combo vaccine prevents has become rote, but health providers really need to give careful consideration to the way they present these vaccinations. "These PAs need to be trained in how to talk about vaccines in ways that don't mislead or scare parents," I said to my sister. "Geez!"

In the end, my baby niece got three injections (dTaP--Diptheria, Tetanus and Pertussis--protecting her against three of the most devastating diseases known to man; Pneumonococcal, which prevents a disease that can lead to meningitis; and her Hep B vaccine, since she hadn't gotten it at birth).

When my sister laid her baby on the exam table, she said, "Oh, look at her looking at me, all trusting and loving." I said: "She's trusting you to do what's best for her because you love her. And you are."
Posted by Moms Who Vax at 2:34 PM No comments:

Yes, it's hard to look at...but this is what a vaccine-preventable illness looks like 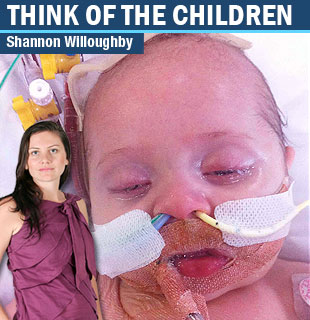 Too many mothers tell us that because they haven't seen measles or pertussis or polio in their lifetime, that the diseases are under control enough to let their children go without vaccination. This poor, innocent soul is living proof that pertussis is still here. This child was too young to be vaccinated and was infected by an unvaccinated child.

This child is recovering.

This photo contains something you must consider when you decide whether or not to vaccinate. It's scary. It's hard to look at. But it's truth.
Posted by Moms Who Vax at 3:22 PM No comments: