Among friends and family, I have a bit of a reputation for telling non-stories. Let me set the scene for you. Imagine you're not curled up in a big, comfortable chair. Imagine you don't have a warm hand-knit blanket around you, and you're not holding a mug of hot chocolate. Imagine that the fire isn't crackling in the fireplace, and, in fact, that there isn't a fireplace at all. Now you're ready for a non-story.

As a child and teenager, I received all recommended vaccines, including Gardasil and the chicken pox vaccine. Nothing happened.

When my son was two days old, he received his first hepatitis B shot. Nothing happened.

When my son was one month old, he received a second hepatitis B shot. Nothing happened.

When he was two months old, he received the rotavirus vaccine, the pneumococcal vaccine, and Pentacel, a shot that protects against diphtheria, tetanus, pertussis, haemophilus influenzae b, and polio. Nothing happened, and nothing happened at four months when he received another dose of each. 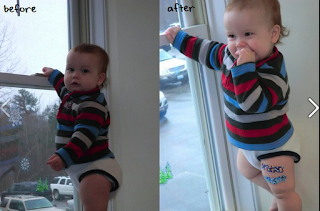 So it went, with my son uneventfully receiving all vaccines as recommended by the AAP, until his 18 month appointment, when he got his second hepatitis A vaccine, and...nothing happened. No fevers, rashes, second heads, or heinous bouts of fussiness. Nothing dreamed up by a paranoid lawyer.

He is now nearly two and a half years old. He's healthy, active, fun, and seems pretty smart. Yawn.

Before I can end this non-story of mine, there's something I need to clear up.

Earlier I said "nothing happened" but that just isn't true. Behind the scenes, my son's body was mounting antibodies to the antigens in the vaccines, a response that, should he ever be exposed to the actual disease, will help protect him.

Look, this vaccination thing... it's not exciting. Seeing as this is a non-story, it's only fitting that my son, upon being vaccinated, didn't suddenly sprout a shiny purple superhero cape with the words "I'm immune!" on it (I expect royalty checks from Marvel Comics when they introduce the character Immunity Man!).

The anti-vaccine movement, to be honest, is a lot more interesting than reality. Their rants and theories are the stuff of trashy novels and Michael Bay movies. I can't compete with their creativity. All I've got for you is this non-story, and with the help of these boring vaccines, I hope my son's medical records remain unworthy of a blockbuster.

Humble Mom is a young vaccinating mom living in a place where neither of those things is common. She runs a Facebook page called Vaccinated and Awesome.

Note: If you are a parent or a grandparent who vaccinates, we would love to help you share your story. Please e-mail us at momswhovax AT gmail.com

Deuce Bigalow and the Don

The beginning of school is a simple time for parents who fully vaccinate their children.  If their children are entering Kindergarten, seventh grade, or a new school, they simply send in the immunization records their pediatrician gave them.  Otherwise, they do not give the matter much thought.

The beginning of the school year must be entirely different for anti-vaccine celebrity parents, I imagine.  It must be, because they are coming out in full force with their complaints about vaccines and the accompanying school requirements.

Actor Rob Schneider is speaking out against a California bill, which has passed through the state legislature and is waiting for Governor Jerry Brown's signature.  What is Schneider's issue with this new piece of immunization legislation?  He objects to AB 2109's requirement that parents meet with a licensed health care professional and receive their signature before opting out of vaccinating their children.  That's right.  He objects to people receiving information from doctors.

Dr. Richard Pan, the Assemblyman and pediatrician from Sacramento who sponsored the bill, met with Rob Schneider in an attempt to discuss the bill and immunizations with him, but apparently the discussion did not go well.  According to the LA Times blog, Pan's spokesperson reported that “It stalled out at times just because they’re really working off two different sets of data, one that comes from worldwide scientific opinion and the other that comes from a collection of celebrities”

With AB 2109, California follows in the footsteps of Washington with its new requirement, and the objections, thankfully, will likely come to nothing.  Nevertheless, it begs the question: what are Schneider and the other anti-vaxxers afraid of with this bill?  AB 2109 does not mandate the content of the discussion between a parent and a health care provider.  The bill does not take away a parent's decision to eschew vaccines.  It simply asks that parents hear the the best information available to experts on the topic of vaccines.  Parents can still choose to side with the non-experts at the end of the conversation and send their children into their communities without contributing to community immunity and public health.

On the other coast lies the side of the story Rob Schneider and the rest of the anti-vaccine movement want you to hear, the side they hope drowns out those conversations between doctor and patient.  Donald Trump has entered the conversation in celebrity style, gaining much attention via Twitter and Facebook.

The latest is a photo showing the number of diseases we can prevent with vaccinations today compared to the number we could prevent in 1983.  Of course, Donald Trump frames it differently with this caption: “Look what happened to the autism rate from 1983-2008 since one-time massive shots were given to children. This chart was given to me by a parent of two autistic children. I may not be a doctor but I have lots of common sense. Read my previous statements on autism…”

I'd like to point out other things that have increased since 1983, which we could correlate with the rise in the diagnoses of autism.  Hip Hop was in its infancy in 1983, and now its reach is everywhere.  Cell phones, also, were nearly unheard of in 1983.  Now, like autism, their prevalence has risen.  And, as Lexi Magnusson at Mostly True Stuff has pointed out, JennyMcCarthy's rise in fame is also correlated with the rise in autism.

In fact, connecting vaccines to autism is one large failure to understand that correlation does not equal causation.  Business Week pointed out that we can correlate M. Night Shamaylan's decline in film-making quality with a decline in newspaper sales and Michele Bachmann's presidential candidacy with the show Staten Island Cakes.

It's simple, though.  Vaccines do not cause autism.  They just don't.  Even when anti-vaccine groups have tried to show that the incidence of autism is great among the vaccinated than the unvaccinated, they have failed.  They have also failed to float a theory that links autism to vaccines.  Study after study has disproven any possible link.  In fact, the science exonerating vaccines in the rise of autism is so thorough, that it is considered scientifically settled.

Behind it all are things a little more insidious.  Part of the anti-vaccine spiel that vaccines cause autism rests on a fear of autism.  This fear of autism leads to all manner of abusive, terrible, and useless therapies, from chelation to bleach enemas.  I have also seen autistic adults being berated and bullied for demanding their right to be accepted for who they are.  In fact, the berating and bullying is present on Donald Trump's Facebook post.  All of this treatment is inhumane, and no person deserves it, whether he is autistic or neurotypical.  Everyone deserves acceptance for who he is and who he cannot help being.

I cannot help but be viscerally angry at celebrities who use their spotlight to instill fear in parents about vaccines, autism, and conversations with their own doctors.  They have a big voice, whether they deserve it or not, and they are using it to shout down experts and to endanger the health of our communities.  Ignorance is something we can all prevent, and no longer can we allow these celebrity voices to outweigh the reasonable voices of scientifically minded parents who intelligently rely on the best, real experts.  We must all speak out.

Karen Ernst is a mother, teacher, and the co-founder of Moms Who Vax