Call for Action: AB 2109 (or: Pro-Vax Parents and Providers Needed!)

Editor's Note: The religious exemption form was released last week. It can be found by clicking here.

On September 30, 2012, California Governor Jerry Brown signed into law Assembly Bill 2109, which goes into effect January 2014. This law will require a parent or guardian seeking a personal belief exemption (PBE) from the immunizations required for their child to attend school to first obtain a document signed by a licensed health care practitioner that verifies that the practitioner has informed the parent or guardian of the benefits and risks of immunization and the risks of the diseases we immunize against.

Unfortunately, the Governor, in his signing statement, also instructed the Health and Human Services Agency to add a religious exemption to the form. Several commentators addressed the problems with these instructions and I analyzed the legal implications.

Anti-vaccination activists are concerned that this language does not go far enough. We should be concerned for other reasons: that it may allow people to be exempt from immunization, leaving their children and others at risk, without good reason.

We should not allow the anti-vaccination voice to be the only parent voice heard. Speak up and let the health authorities know that you want the children of California protected against vaccine preventable diseases. You can contact:

Diana Dooley, Secretary of the Health and Human Services Agency, at: diana.dooley@chhs.ca.gov

Donna Campbell, Deputy Secretary for Legislative Affairs at CHHS, at DCampbel@chhs.ca.gov (note: only one L in Campbel), or by phone at 916-654-0572

Editor's Note: You do not need to be a California resident to speak out on this issue. Be assured that the anti-vaccine forces responsible for the religious exemption loophole garnered forces from all over the country, as they do in most state immunization rule discussions.

Dorit Reiss is a professor of law at University of California. She has published writings on administrative law, and recently wrote "Compensating the Victims of Failure to Vaccinate: What are the Options?" Dorit is a member of Voices for Vaccines' Parent Advisory Board.
Posted by Moms Who Vax at 8:29 AM No comments:

Voices for Vaccines let us know that raging anti-vaccine organization National Vaccine Information Center is at it again, with billboards up in New Jersey. This time, the company to contact is Lamar Advertising, out of Louisiana. Their comment form will only allow for 512 characters. I shortened my lettter, but here is how it originally read. I will be sending this as an e-mail to Lamar executives as well. Please consider voicing your concerns. 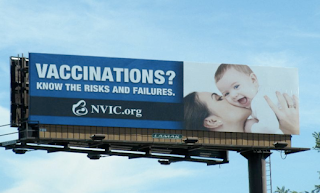 As a parent, I am sickened by your decision to allow noted anti-vaccine organization "National Vaccine Information Center" to advertise through your network of billboards. You may not be aware, as I was not when I was a new parent, that NVIC promotes and propagates misinformation about the safety of vaccines. They actively campaign against childhood immunizations, which have singlehandedly been responsible for keeping devastating vaccine-preventable diseases out of our communities.

Because of NVIC's misinformation campaign, we have seen more and more parents choosing not to vaccinate--and the result has been heartbreakingly predicable: children are contracting vaccine-preventable diseases like pertussis, measles, and mumps. Children have been hospitalized and many, mostly infants, have died. Vaccines are incredibly safe and keep our children healthy. To allow an organization like NVIC to advertise through Lamar billboards is a reckless decision that I urge you to reconsider, for the good of the community, and all children--including yours.