The National Vaccine Compensation Injury Act:
A Compromise – not an Injustice

Or: Why the Latest Video from the Canary Party is Misleading 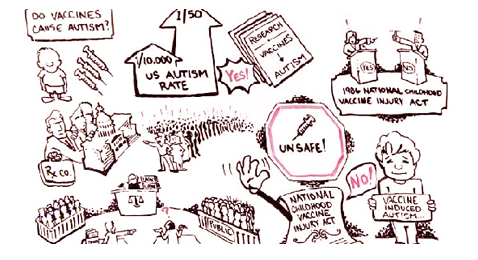 However, in a new video narrated by actor Rob Schneider, the Canary Party claims that the only reason there is doubt about the link between vaccines and autism is because the NVICA created a system that discriminates against plaintiffs and works completely in favor of pharmaceutical companies, and that it is run by a corrupt government.

The video is wrong pretty much from start to finish. This blog post will address three of its problems: the claim that NVICA is the only thing hiding the link between vaccines and autism; the inaccurate, incomplete depiction of NVICP; and why the claim that using the regular courts instead will benefit plaintiffs is wrong.

No Credible Evidence Supports a Link Between Vaccine and Autism
The Canary Party’s video purports to tell the story of a child named Eric who suffers from “vaccine-induced autism” – but there is no credible evidence that there is such a thing as “vaccine-induced autism.” The Canary Party video offers three pieces of evidence on this, none of which really support the claim. First, it says that as more vaccines were added to the recommended immunization schedule, autism rates “skyrocketed.” The video does not explain why this temporal correlation alone shows causation, or why it is a more convincing correlation than, say, increase in internet usage and raising rates of autism.

It also ignores the evidence suggesting that the increase is because of the change of diagnosis and of detection, not necessarily in incidence. To back this up, the video refers to “dozens” of studies, and the link attached to it refers to a list of studies compiled by Ginger Taylor, the Canary Party’s Vice President. However, that list does not support the claim either: the studies are either seriously flawed, have nothing to do with vaccines, or otherwise do not support the claim, as detailed in posts by blogger Liz Ditz, who thoroughly debunked them.

In contrast, numerous serious studies, some very large scale, have examined whether there is a link between vaccines and autism. No credible study found one. (Here is a partial list.)

Third, the video claims that NVICP compensated cases where a child had autism. But the NVICP never compensated a case on the theory that vaccines caused a child’s autism. Never. In fact, such a claim was soundly rejected by the program in the Omnibus Proceedings. Bailey Banks, whom the video mentioned, was not compensated on a theory that vaccines caused his autism but because vaccines may have caused another problem. The video also refers to a study by Holland, et al, which found 83 children compensated by the program who also had autism, but none of these children was compensated because vaccines caused their autism – they were compensated for other things (e.g. encephalitis). And, in fact, the rate of autism in the population of children with severe vaccine reactions (“vaccine injury”) is actually lower than the rate of autism in the general population.

NVICP Offers Advantages both to Manufacturers and Plaintiffs
The video suggests that NVICA was passed in 1986 as a result of pharmaceutical lobbying with the sole goal of shielding manufacturers from liability, and that it does shield manufacturers from liability. That claim is incomplete. The Act was passed to prevent companies from leaving the vaccine business, because they were leaving, leading to vaccine shortages, putting children and adults at risk. But that was not the only reason.  Plaintiffs were also complaining about the adversarial, prolonged court process and the act looked to simplify that process. In Bruesewitz v. Wyeth, the Supreme Court explains the quid pro quo involved – somewhat similar to the compromise represented in workers’ compensation schemes:  in exchange for shielding manufacturers from liability for some kind of claims – design defects, for example – the plaintiffs received substantial benefits: no show of fault is required, and plaintiff does not need to show the product was “defective” (which they would have to do in a design defect claim). The plaintiff does not have to show causation when claiming one of the injuries listed in the “Vaccine Injury Table."

The process is simplified. Attorney fees are provided for any claim that is not frivolous – including losing claims (the video claims attorney fees are slashed and delayed to “punish” claimants, but brings no evidence to that effect; in fact, the program paid out over 150 million dollars in attorney fees.

In return for the substantial benefits given plaintiffs, manufacturers are shielded from liability for design defects; but they are not invulnerable: they can still be sued for manufacturing defects or warning defects. This is substantial: the worst vaccine-related disaster in modern history, the Cutter Incident, was the result of a manufacturing defect, not a design defect: a vaccine designed to include an inactivated – dead – virus actually included a live poliovirus, permanently paralyzing 200 children and killing ten. That case could still be brought in the regular courts today.

In short, presenting the program as tilting the law in Big Pharma’s favor is wrong. It does protect manufacturers from some kinds of liability; but it offers plaintiffs substantial benefits. The program is also subject to judicial review: decisions can be appealed to the federal judiciary if a plaintiff does not agree with the result.

NVICP Offers Plaintiffs Real Advantages over Regular Courts
The Canary Party's video tries to portray the program as unfairly barring plaintiffs from the much better--as it suggests— judicial process. The video portrays an idealized, inaccurate process of civil court litigation proceedings: some of the problems it points out in the NVICP process will be found in civil litigation too – and that process will include other costs and disadvantages to plaintiffs.

Comparison of NVICP and Civil Litigation
One advantage the video suggests a civil suit will have over the NVICP program is that plaintiffs will have their own “private lawyer,” (although the lawyers representing the plaintiffs are, like the lawyer in a civil suit, retained by the plaintiffs and are, in fact, “private lawyers” too) who will not have to rely on being paid from the program’s funds. But will that benefit plaintiffs? The video suggests that payment through the program fund hampers getting representation. But the usual arrangement in civil litigation for tort suits would be a contingency fee. Why would lawyers be more willing to take vaccine injury cases when they only get paid if they win than in a system that pays them even if they lose? And if a plaintiff won, under the usual contingency fee regime, the lawyer would be getting 30-50% of the award. Under NVICP, the plaintiff gets the entire award.

The video suggests a special master is not objective. But the special master is a lawyer appointed by the Judges of the United States Court of Federal Claims, a federal court whose judges have life tenure. There is no reason to think the special master is any less objective than a federal judge. The video then goes on to suggest that the lack of legal precedent is an issue for the court. The court has issued inconsistent verdicts in the past; but then, civil courts in the United States are not necessarily consistent either. Juries have been known to reach differing verdicts on similar facts. Courts in states across the U.S. reach differing results on matters of law. There is no guarantee that a civil court will be consistent. Precedent only applies within a given jurisdiction’s hierarchy, not across juries, and it does not bind other jurisdictions, or even the highest court of the jurisdiction in question. A move to the civil courts may reduce consistency in results rather than increase it.

Challenges of Civil Litigation
Winning a product liability suit is not easy. A comparative view may be instructive: as early as 1953, the German Federal Supreme Court, the Bundesgerichtshof, of February 19, 1953 (BGHZ 9, 83), awarded no-fault compensation to someone injured by a vaccine, because showing fault – as was required for civil litigation – is very hard. A World Health Organization report found 19 countries that adopted no-fault schemes for vaccine injuries – and in several countries where this was left to the regular courts, “significant public pressure” calls for similar no-fault schemes. It is simply hard to win such a case in civil courts.

To win, plaintiffs would have to show a vaccine’s design was defective, using one of the existing tests; unlike manufacturing defects, design defects are handled under negligence principles, not strict liability. If the “unavoidably unsafe” category is actually applied to vaccines (the Supreme Court – contrary to what the video says – rejected its application to NVICA in Bruesewitz v. Wyeth, the plaintiff will have to show the manufacturer was actually negligent indesigning the vaccine, not an easy thing to show (although the Idaho court took a different approach to this).

There would be no table injuries, so plaintiffs would have to show causation in every case, using expert testimony. Given the abundant amount of current studies against the claim that vaccines cause autism, and the lack of credible studies supporting it, the plaintiff is unlikely to be able to do that.

According to the latest data I found, product liability claims focusing on asbestos win 53% of times, but other product liability claims win 19.6% - and that includes manufacturing defects, subject to strict liability. The chances are high, given the causation challenges, that claims like the hypothetical Eric’s would do much worse, losing the vast majority of the time.
So, exchanging a civil process for NVICP would be probably make it harder for most plaintiffs to win, would not provide plaintiffs additional process guarantees, and be unlikely to make it easier for them to find a lawyer—and all that at the cost of potentially driving vaccine manufacturers out of the market when some cases – probably not related to autism – do win.

It’s a great idea, however, if you want to undermine vaccination and bring back vaccine-preventable diseases. It would work great for the one in a million plaintiffs or less who will win and maybe – just maybe - get a larger award than she would in the vaccine court (though even then she would have to split it with her lawyer); but it would not help and may well harm the majority of plaintiffs, and it would not help public health.

For the most part it’s a bad idea all around, based on faulty premises.

Dorit Reiss is a professor of law at University of California. She has published writings on administrative law, and recently wrote "Compensating the Victims of Failure to Vaccinate: What are the Options?" Dorit is a member of Voices for Vaccines' Parent Advisory Board.
Posted by Moms Who Vax at 9:03 AM